Before you can make the most of using Jarvis, you need to understand how Jarvis thinks. Jarvis often produces astounding content but sometimes goes off the rails, repeats himself, or produces content you don't like.

What You’ll Learn in This Lesson

In this lesson, you will:

What data Jarvis is trained on

The underlying AI model that powers Jarvis was trained by reading about 10% of the published internet, with the goal of understanding how people write. Jarvis has read millions of blog posts, Reddit threads, websites, newspapers, and more. This gives Jarvis an unbelievable grasp of imitating the human language and creating content most find exceptional.
The base training was completed at the end of 2019. That means Jarvis doesn't know about current events from January 2020 and beyond. Jarvis doesn't know COVID-19 happened.
This is the point some will say, "Jarvis can't help me then! I write topics that are new since 2019!"
While Jarvis may not know about COVID-19 or that the Lakers won the 2020 NBA Championship, he does know vast amounts about coronaviruses, pandemics, Wuhan, SARS, Lebron James, Basketball, The Lakers, and NBA. By feeding Jarvis updated information about the topic you're writing about, you'll see Jarvis can typically do a great job of writing about it.

Predicts 1 word at a time

Jarvis writes by predicting which word should come next in a given sequence. For example, if you asked Jarvis to complete the following sentence,

Jarvis will make a list of which words are most likely to come next and assign a percent chance each word has of coming next. His shortlist of words might look like this:

Depending on how we have trained Jarvis, he will select one of those words. The higher chance assigned to the word, the more likely he is to choose it.

In this example, let's say Jarvis chooses the word convenience as the next word. Now our sentence looks like this,

Now, Jarvis would repeat the process again to decide which word or punctuation mark should come next. Here, his shortlist might look like this:

He's almost certainly going to write the word "store", but there is a very small chance he ends the sentence with a period and moves on to the next sentence.

Jarvis uses past context to predict content moving forward, one word at a time. What you input to Jarvis greatly impacts the content he will output. It both influences the shortlist of words he's pulling from, and the probability they have of being used.

Jarvis loves following and continuing patterns. Functionally, he's asking, "Is there a pattern here that I could or should be following?"

For example, let's say we opened a document in Jarvis and wrote the following: 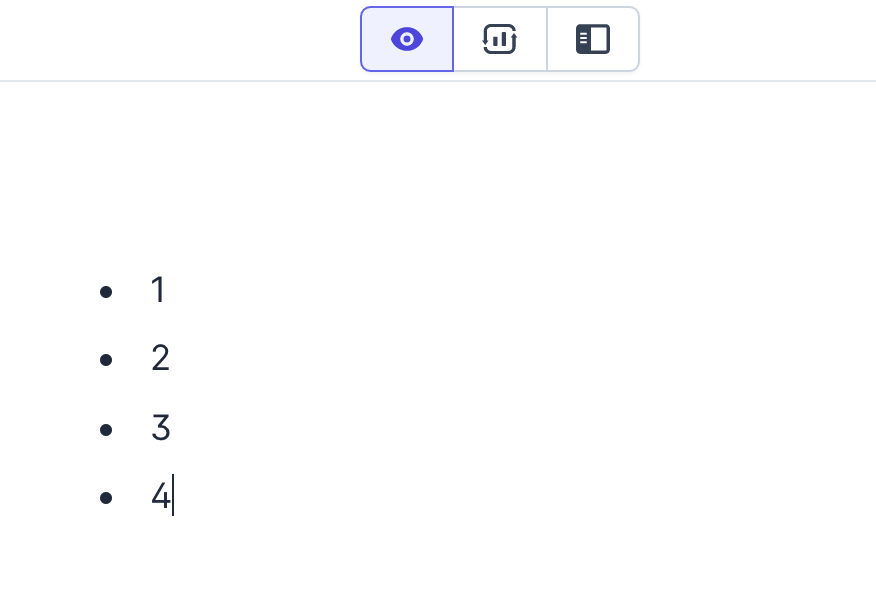 If we then asked Jarvis to continue writing by hitting the Compose button (or CMD + J), what do you think Jarvis will write next?

Jarvis will be highly likely to recognize and continue the pattern by writing:

Preventing Jarvis from repeating himself

Inside of a document, sometimes Jarvis will repeat himself. Often times this happens when starting out before a pattern is set.

Let's look at an example where I type the following and then ask Jarvis to keep writing by hitting the Compose button (or CMD + J).

Dave Rogenmoser is a very tall man. He is 6'8" tall and rides a stallion to work every day. He lives in Austin, TX, with his wife and 3 sons. He once ate the beating heart of a king cobra.

When I hit Compose, Jarvis is asking himself, "Based on my instructions and the text I've been given, what word should I write next in this sequence?"

Jarvis is also asking, "Is there a pattern here that I could or should be following?"

In this example, Jarvis would likely think of the following options for how you want him to continue the text:

It's likely that you only want one of these, and may be disappointed if Jarvis goes a different route than you expected. By providing more instructions or a clearer pattern to follow, you can greatly increase the chances of Jarvis doing what you want. 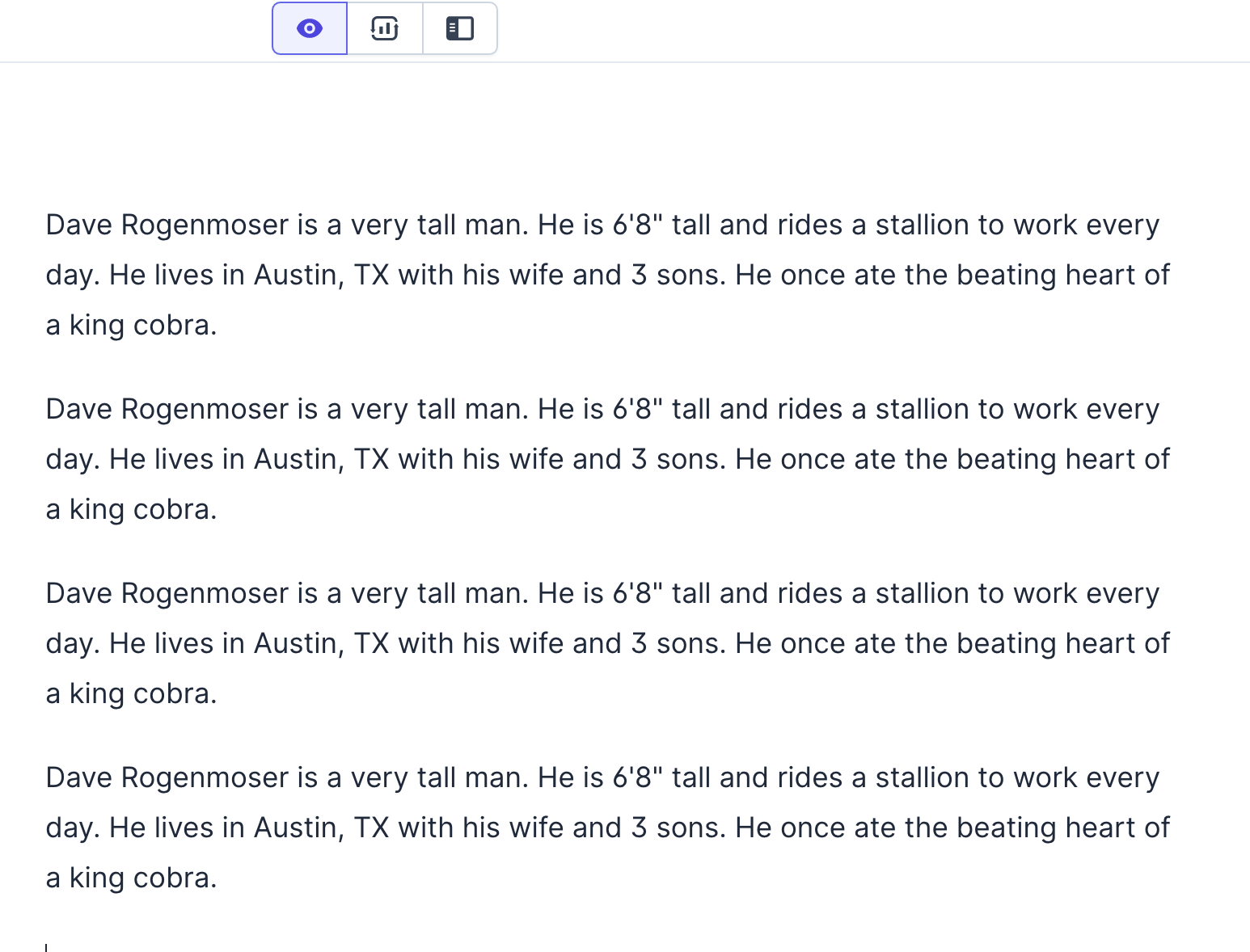 To direct Jarvis to continue writing about Dave, I could frame the next section by writing "Dave's growing up years:" 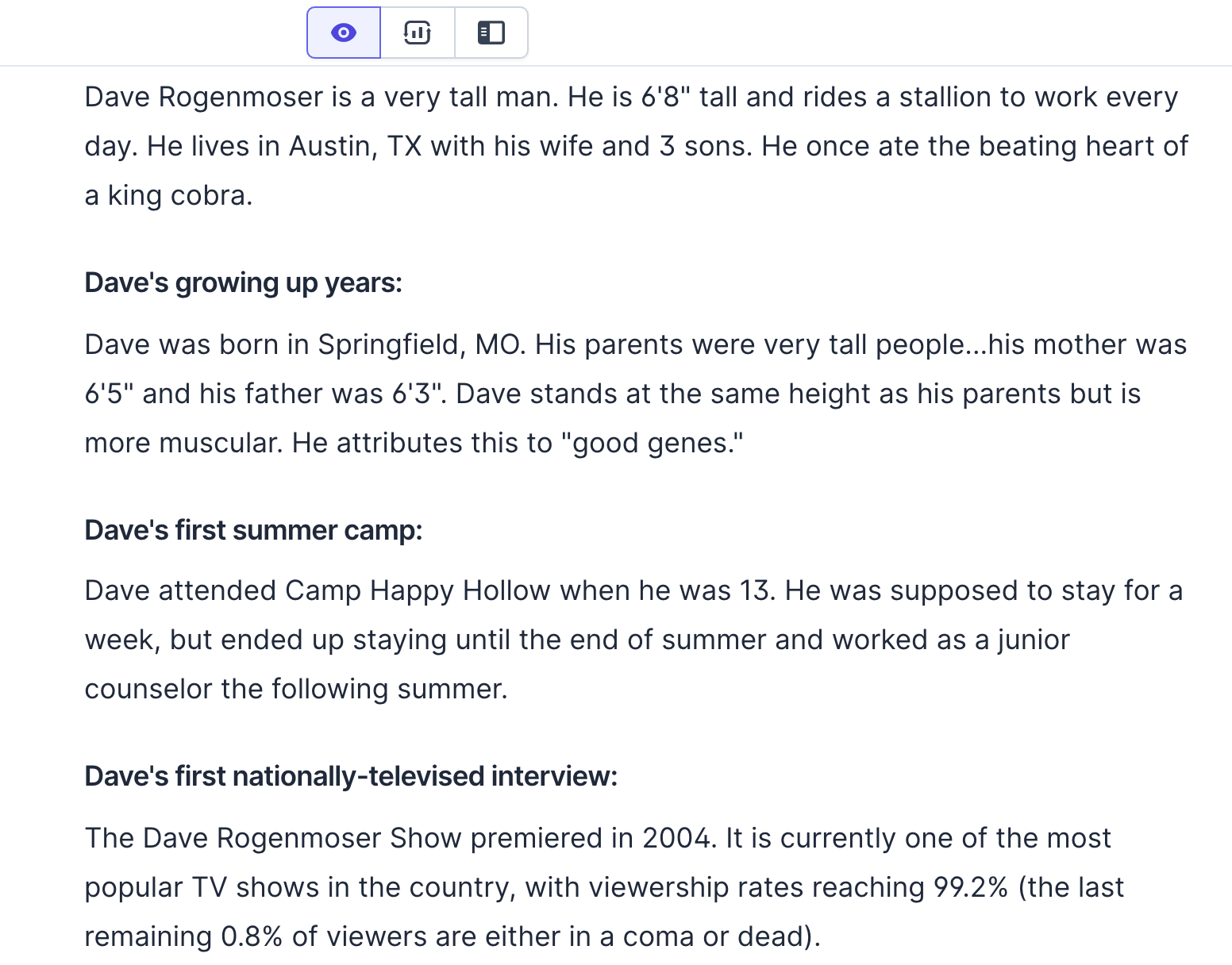 Dave Rogenmoser is a very tall man. He is 6'8" tall and rides a stallion to work every day. He lives in Austin, TX with his wife and 3 sons. He once ate the beating heart of a king cobra.

Dave's growing up years: Dave was born in Springfield, MO. His parents were very tall people...his mother was 6'5" and his father was 6'3". Dave stands at the same height as his parents but is more muscular. He attributes this to "good genes."

Dave's first summer camp: Dave attended Camp Happy Hollow when he was 13. He was supposed to stay for a week, but ended up staying until the end of summer and worked as a junior counselor the following summer.

Dave's first nationally-televised interview: The Dave Rogenmoser Show premiered in 2004. It is currently one of the most popular TV shows in the country, with viewership rates reaching 99.2% (the last remaining 0.8% of viewers are either in a coma or dead).

As you can see, Jarvis clearly understood that I wanted him to write about Dave's growing-up years. You can also see the pattern Jarvis is modeling. He's thinking something like "The user wants me to write a section header about Dave's life, and then a few sentences describing it. Over and over. The more times he sees this pattern, the more likely Jarvis is to continue it.

If Jarvis isn't writing the content that you want, ask yourself: